Look at this. It’s the last day in July. I can’t even.
This summer got away from me in a flurry of summer storms, and random illnesses, old house issues, and remodel projects. Blogging had to take a necessary backseat to survival for a little bit. But look! Here are some pickles. The world is feeling right again. 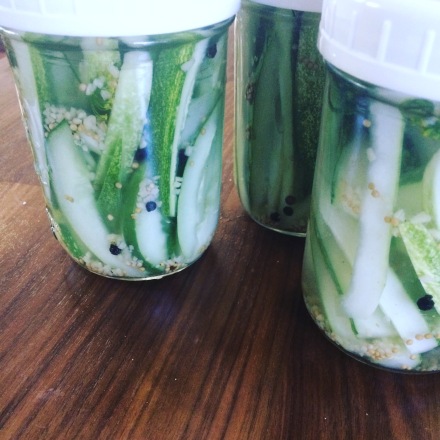 Women have been preserving fruits and veggies and meats and all manner of foods for decades. They learned from their mothers who learned from their mothers, and as a result, some of us were lucky enough to have mothers who canned. But the rest of us have had to try and pick it up on our own here and there, throwing in heathy doses of apprehension along the way. What if I do it wrong? What if I poison my family? What if I break jars while boiling them and get glass in everything?
Enter Refrigerator Pickles.

Refrigerator pickles are one of those preserving miracles that feel a little like cheating. Canning without canning! It’s awesome. It’s also a great place to start if you’re new to preserving and nervous about the process. No boiling jars, no bacteria fears, and yet, boom. Preserving!

I have a crazy batch of cucumbers in my garden this year and they produce the most adorable little cucumbers. But they are very seedy. I hate seedy pickles. So instead of slicing my cucumbers or even chipping them, I cut them in half, scooped out the seeds, and sliced them up. Feel free to experiment a little when contriving pickling recipes. I like garlic dill with a hint of sweetness, but not sweet like bread-and-butter pickles. This recipe reflects my preferences. Try it and then adjust to your own likes and dislikes! 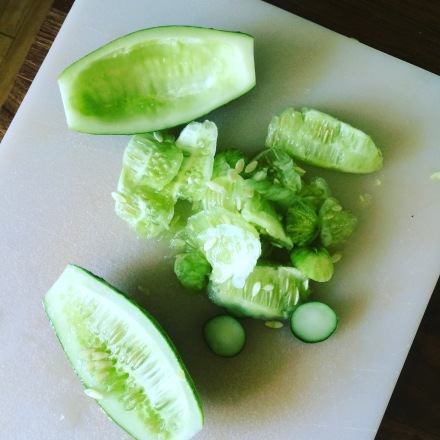 I started with a dozen cucumbers, 6″ to 9″ inches in length. Once sliced, they filled five quart jars. The brine recipe is built for five jars of pickles, so adjust accordingly if you have more cucumbers.

In a saucepan, boil 1 cup of vinegar, 1 cup of water, salt and sugar until they dissolve. Remove from heat and add the remaining water and vinegar—preferably cold so as to cool the boiled mixture down to room temp. If the brine goes into the jars over the cucumbers hot, they will get soft instead of staying firm and crunchy in your fridge.

Fill each jar equally with cucumber spears, or chips, or slices—whichever cut you prefer. Don’t pack them too tightly as the breathing room will make the pickling process more effective. To each jar add garlic, mustard seeds, peppercorns, and several heads of dill. Just cram them right down in the jar with the cucumbers. Don’t worry about looks here. It’s more about making everything fit. Fill the jar with the brine (cooled to room temp) until the cucumbers are just covered. Tightly cover with either a plastic lid or a metal canning jar lid and band, and gently shake to distribute the dill, mustard and peppercorns. Repeat with each jar and then refrigerate for at least 7 days before opening a jar to sample.
The pickles will keep in your refrigerator for four to five weeks.
Enjoy!

Hey, I’m Beth—a home cook writing about what nourishes and snapping pics from my messy kitchen. I believe cooking, like life, is a beautiful mess. Feel free to pull up a chair and grab a cup of coffee. I’m glad you’re here!