I have this patch of rhubarb in my garden—the grandchild of a plant that has been growing at my house for more than thirty years, and it’s fantastically huge. In the height of summer it takes up a full 8-foot by 12-foot raised garden bed.
I love it.
I call it Gertrude. 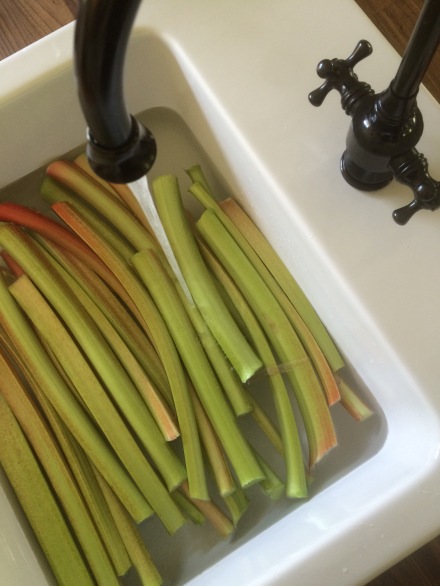 It’s only the middle of May in Minnesota but I’ve already harvested two batches of rhubarb from Gertrude, and yesterday’s harvest was a whopper. I had to use a laundry basket to bring it all inside. A batch of rhubarb sauce ensued. Also this cake.

Now, I’ll be the first to admit that baking is not more forte. I’m better with main dishes and soup. There’s just so much chemistry in baking and I’ve never been great with chemistry. But.
But. But. But.
This cake.
—Custard-like, loaded with fruit, and finished with a crisp sugared crust. The almond flavor adds a hint of something magic, and topped with a fresh dollop of whipped cream, it’s basically perfection.
Enjoy! 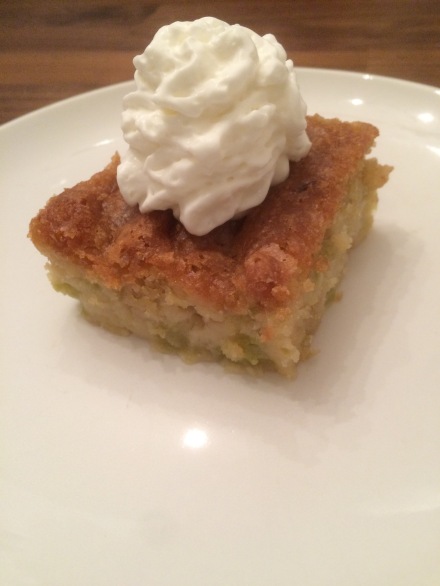 In a large bowl or stand mixer, cream the butter and sugar together. The larger grains of sugar give everything a different texture, but trust me, the end result is amazing. Add almond extract, salt, baking powder, and eggs. Mix well. Scrape down the sides of your bowl and add the flour. The batter should be thick, almost thicker than expected. No worries, the juice from the rhubarb will thin it out a bit. Add the rhubarb and mix again. It’s going to look like too much fruit for the cake. But not to worry. The eggs and flour will eventually hold everything together.

I have a deep 8x 12, casserole pan I use to bake this cake. It will overflow a standard 9 x 9 cake pan. If you have a 9 x 16 cake pan, that may work better. Grease the pan well and spread the batter evenly with a spatula.
Sprinkle sugar-in-the-raw generously over the top.

Bake for 30 minutes at 350 degrees and then turn the heat down and bake for another hour and a half (yes, that’s correct) at 325 degrees. Keep an eye on it and cover the cake with aluminum foil if it begins to brown too darkly over the top. After it had been in the oven for a total of two hours, give the pan a light shake. If the center is still jiggly, continue baking at 325 until it sets. (The “insert knife until it comes out clean” trick won’t work on this one because the finished cake has an almost custard-like texture).
Allow the cake to cool once it has finished baking.
Serve with whipped cream or ice cream! 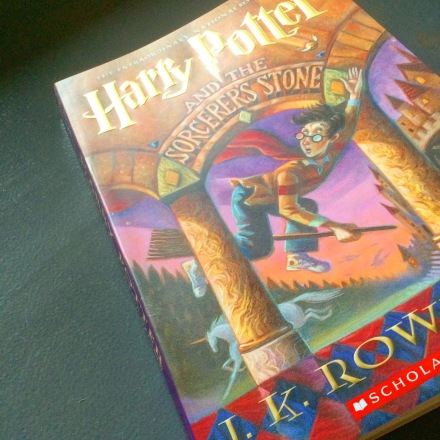 I finally started reading Harry Potter and the Sorcerer’s Stone to my two older kids this weekend, and oh my goodness. SO. MUCH. FUN. Only a couple chapters into the first book and they are already picking up on the challenges of making good choices, courage, the reality that adults don’t always get it right, that life isn’t fair, and that doing the right thing is always the right thing.

And the food . . . Rowling got it. I love how she details food.
Bags of stale crips.
A can of tomatoes on toast for breakfast.
Fried bacon.
A package of squishy sausages in Hagrid’s pocket.
Candy and sweets with so many odd names and flavors I can’t even remember them all at the moment. Except those jelly beans of all different flavors—because Jelly Belly, obviously, have jumped on that train.
I need to write about food in my own stories some more . . .

Today is about pie, though. Rowling’s description of the pies and tarts at the Hogwart’s feast got me itching to try a new pie crust recipe I’ve been thinking about. Plus I made butter again this weekend, so there is both icy cold buttermilk and fresh butter in my fridge waiting for experimentation.

Hope you had a great weekend, friends.
Here’s to good books and good food.
Enjoy!

In a food processor, whirl the butter, flour, and salt until crumbly. Then, one teaspoon at a time, add the buttermilk until a dough forms. The trick here is not to overwork the dough or let it get warm. You don’t want the butter melting into the dough, but rather staying rather crumbled within it—those butter bits are what will make the dough flaky when it bakes.

Note: these measurements make a single crust, so you’ll need to double the recipe for a top and bottom crust.

I prefer using wax paper or parchment paper to roll out pasty dough because it means I don’t have to try and scrape it from my counter top or risk over-flouring it. Also, refrigerate whatever dough you aren’t currently working with.

Lay the bottom crust in the plate and add the filling of your choice (I’m going with apple, cheddar, and sweet-potato today).

Roll out the top crust as you did with the bottom, fit over top the pie, trim any excess around the edges and crimp.

Bake at 350 degrees until golden brown across the top and bubbling. About 40 minutes or so. Allow to cool before cutting so the juices can re-incorporate.

For a full tutorial on how I use wax paper and crimping, check out my earlier pie crust recipe tutorial. —Different recipe, same method. 🙂

No matter which way you spin it, fall isn’t fall unless you throw in a WHOLE LOT of pumpkin spice. It’s basically an American movement that finds a home in the hearts of blanket-scarf-clad, tall-boot-wearing, coffee-sipping women everywhere.
No judgement, I’m at the front of that pack, proudly waving my slouchy, jewel-toned beanie. So, you can add these pumpkin bars to that mix, and it’s a pretty complete fall package for your average women anytime in October. Or guy, really.
I love them. These folks. They are my people.
Bonus: these particular bars are FREE of all the things. (Gluten, sugar, dairy). But they do contain eggs and nuts. Cashews actually. Salted.
Mmmm. Salted cashews.
*ahem* You’ve been warned.
Enjoy! 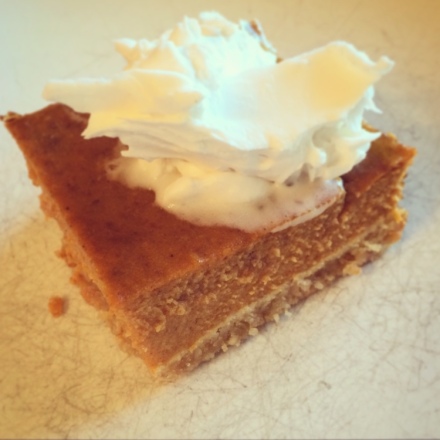 This recipe takes a little bit of initial prep work and the inclusion of a creamer which you’ll have to make in advance, but I promise, it’s worth it. I mean, really. actually pumpkin bars with ALL THE FREES?! (Gluten free, sugar free, dairy free, chemical free).

So begin by mixing up a batch of coconut milk creamer.
(1 cup prunes and 1 cup boiling water in a blender, whirled until smooth. Add two cans of whole-fat coconut milk. Whirl again and there ya go!) Set aside.

For the crust, begin by whirling cashews and salt in a food processor until smooth but not so long that it begins to liquify into an actual nut butter. Catch it before that stage. In a large mixing bowl, combine ground cashews, egg, clarified butter, and almond flour until a soft dough forms. It won’t exactly form a ball the way a typical dough would, but it will by nice and sticky. Spread with a spatula and press with your fingers into the bottom of a butter 9×14 pan. Bake at 400 degrees until it sets. About 8 minutes or a bit less. Remove from oven and allow to cool.

While the crust is cooling, go ahead and mix up the filling, starting with processing the dates, which will serve as the sweetening element—in liue of sugar or maple syrup. Once the paste/syrup forms, scrape into the bottom of a large mixing bowl. Add the spices, eggs, pumpkin and the creamer you mixed up earlier. Using a mixer blend the filling until the ingredients are well-combined. Pour over the crust and using a spatula, smooth until level in the pan.
Bake in a 350 degree oven until a knife inserted comes out clean. About 30-35 minutes. Adjust time accordingly.

Once the bars have cooled you can top with ‘whipped cream’ before serving. Simply skim the coconut cream from the top of the cans of coconut milk (this is easier if you’ve refrigerated the cans for several hours beforehand). Using a mixer, beat until peaks form, just as you would with standard dairy whipping cream.

Why, yes. This is another zucchini recipe. I’m trusting you’ll forgive the repetition as, hopefully, you have these gorgeous squash coming out of your ears as well. I have a basket on my kitchen counter full of them. I keep looking at them and making promises. “You shall not go to waste! Nor you! I shall make something beautiful out of you!” And so. And so: Another zucchini recipe. This recipe calls for four cups of zucchini, so it’s a fantastic way to use up some of the excess. 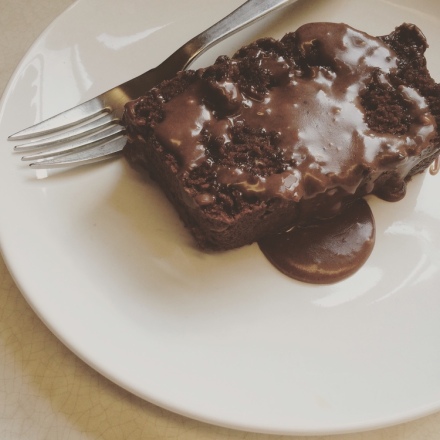 In a large bowl, mix butter, vegetable oil and sugar. Add vanilla, baking soda, baking powder, salt, and eggs and continue mixing until well-combined. You can use a stand mixer, a hand mixer, or a good-old fashioned whisk, as you prefer. Spoon in the yogurt, cocoa powder, zucchini, and chocolate chips until smooth. Add the flour and combine well. (I always save the addition of flour for last so I can adjust the amount if necessary).
You can use a 9″x13″ pan for this cake, but I prefer loaf pans as the cake is easier to freeze and save for later. And I’m all about having cake on hand for later. So, whatever your pan preference, spray it well with a cooking spray or grease with butter so the cake will not stick to the sides of the pan. This recipe will make a deep cake in a 9″x13″ pan, or three loaf pans. Bake in a pre-heated oven at 325 degrees for 40-50 minutes or until a knife inserted into the cake comes out clean. Once the cake is baked, set aside and allow to cool.

FROSTING
In a medium saucepan over medium-low heat, melt butter, milk, and cocoa power together, stirring frequently. Remove from heat and whisk in powdered sugar until there are no lumps. If you want to pour or drizzle your frosting, do not add as much powder sugar, but if you’d rather smooth or spread the frosting (this is my preference), then feel free to add all, or even more than six cups of powdered sugar. 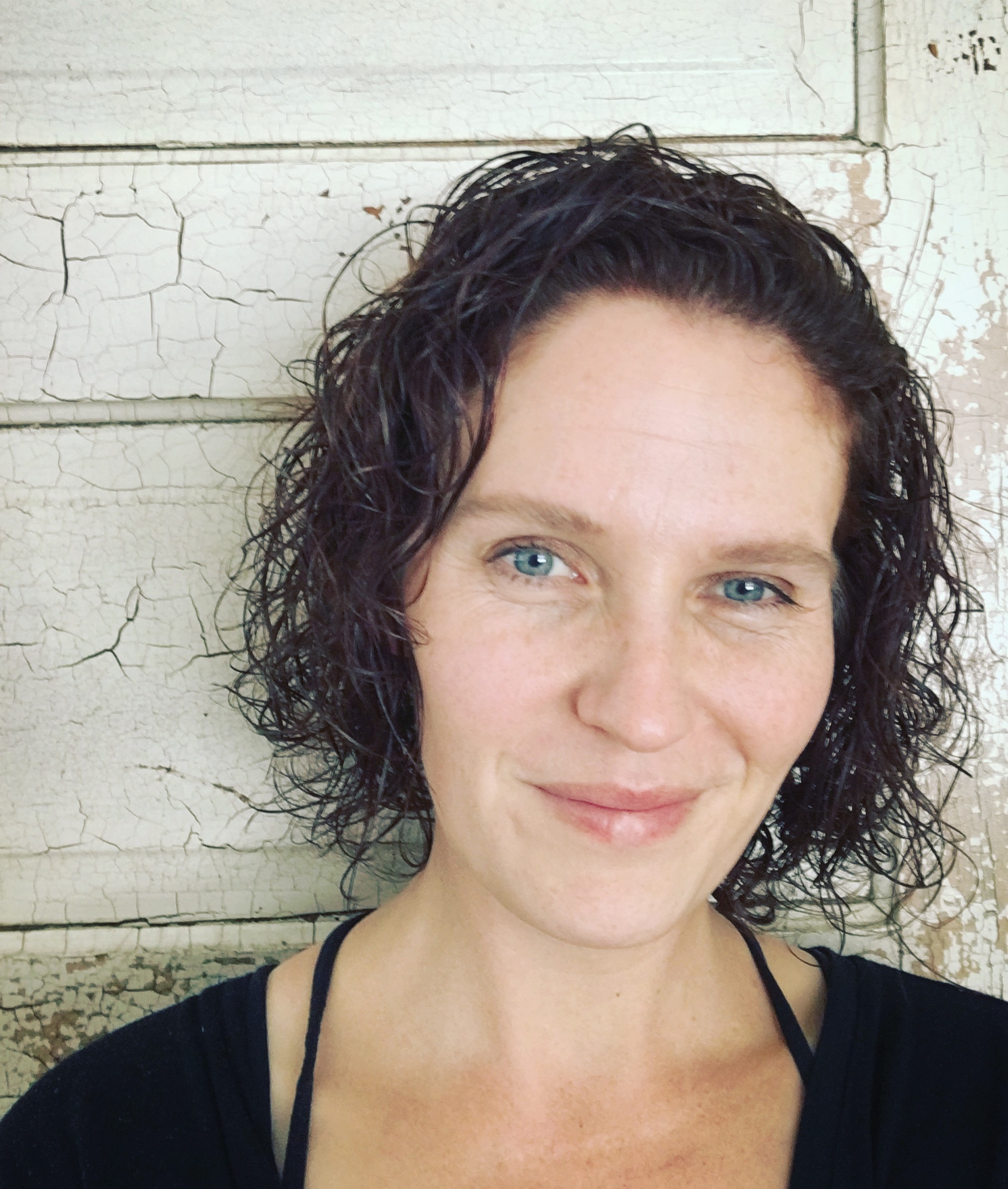 Hey, I'm Beth—a home cook writing about what nourishes (body and heart!) and snapping pics from my messy kitchen. I believe cooking, like life, is a beautiful mess. Feel free to pull up a chair and grab a cup of coffee. I'm glad you're here!

Let’s do the Social Media Thing