Fall is so much about soup for me. So much.
Bisque. Chowder. Bean. Split pea with bacon. Wild rice. Noodle. Veggie. Italian. All of them. But Pho is a new discovery. I’d never made it before this spring and then BOOM. Several pots of the stuff raced through my kitchen with warm welcomes and sad farewells. Another reason to love this particular soup is the whole gluten-free thing it’s got going on. No cream base, but not a typical veggie soup either. This baby can pack a little heat, if you’re into that kind of thing. And for me, on this particular fall afternoon, it was exactly what the cool temps ordered. This is a simplified version of the traditional Vietnamese noodle soup. Faux. Yah. See what I did there? 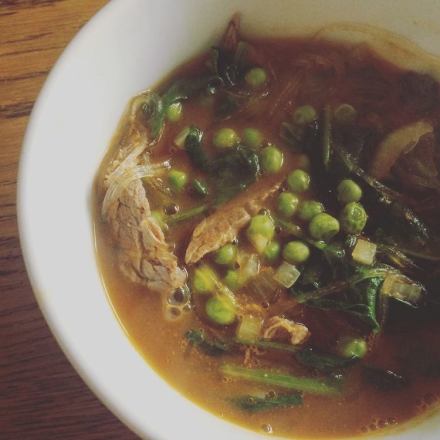 In a large stockpot heat sesame oil and sauté diced onion. Season with ginger, salt, rice vinegar, and 1/2 cup of vegetable broth. Cook until onions are soft and then add another two cups of broth and heat until boiling. Add your meat of choice. Make sure to cut thin, bite-size pieces of whatever meat you choose. The thinner they are, the more tender they will be when cooked in the broth. Once the meat is cooked add the rest of the broth and Sriracha sauce. Taste as you go and adjust the Sriracha, salt, ginger, and rice vinegar as needed. Taste is such a personal thing—especially when it comes to heat.

In a separate pot, heat 2 quarts of water to boiling and cook bean threads as you would any noodle—el dente or just slightly chewy. I recommend adding the noodles to a bowl and then spooning the pho over the noodles for each serving, rather than cooking the noodles right in the pho. They tend to get . . . what’s the word . . . ? Slimy. Once the bean threads are cooked, drain and set aside.

Add green peas to the pho, about a cup or more, or as desired. And several cups of spinach. Cook, stirring gently until the spinach is wilted.
Spoon over bean threads and enjoy!

Hey, I'm Beth—a home cook writing about what nourishes (body and heart!) and snapping pics from my messy kitchen. I believe cooking, like life, is a beautiful mess. Feel free to pull up a chair and grab a cup of coffee. I'm glad you're here!

Let’s do the Social Media Thing